My Great Grandmother Grace Diment had a sister Sadie (Sadye) who was born in Colorado in Dec 1880. She later Married Isidor Rummel and had 2 Sons. Below is some information regarding her som Sam. Accordingy to my Mother Goldie German ( Joan Robbins ) - Sam was sick as a child, he took a corresponse course to become a Attorney. Sam Rummel was the Attorney for gangster Mickey Cohen. He along with Ernie Primm fought and won the right to have legalized Poker rooms in California which led to the opening of Casinos 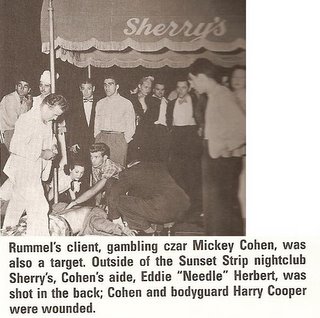 
Below is an excerpt from the book Death in Paradise


Sam Rummel: "The Great Mouthpiece"
During the 30s and 40s, when a corrupt City Hall and paid-off policemen worked hand-in glove with organized crime,Sam Rummel was attorney of choice for many mobsters and cops on the take. After World War II Rummel acheived true celebrity status as the close freind and busy advocate of L.A.'s star gangster gambling czar Mickey Cohen. Rummel himself was part owner of several Casinos in Reno and Gardena. "The mobs mouthpiece" thrived on the company of his dangerous clients, but ultimately this perverse infatuation led to his death. 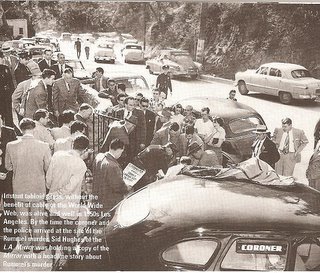 By 1950 the US Governments investigation into organized crime had their sights set on Los Angeles. One of their main targets was a finance company that was a front for a huge bookmaking operation run by Cohen associates, advised by Rummel. The "Company" worked out of a storefront on East Florence ave in county territory. Investigator seizeds the companys ledgers which revealed $108,000 payoff to police sheriffs. Suspicion fell on a vice squd captian as well as a sheriffs captain who were more than once had ordered deputies in the vice squad (which was not his department ) to "lay-off the bookies". Both were called as witnesses ; both stammered and came of looking guilty as hell. One "retired" soon thereafter ; the other was yanked off the vice squad.


By early December Rummel knew that an L.A. grand jury investigastion was imminent. On Dec 11th the very worried "retired " captain summoned Rummell for a secret meeting with himself and two others from the sheriffs office.

What was said can only be surmised ; what happened afterward may have been the result of that meeting,

Rummel arrive home late that night,pulling into the driveway of his "lavish villa" (as the papers called it) on Laurel Canyon Blvd at 1:30 am. As he walked to the front door a loud blast rang out. Rummel died on the walkway by an iron gate; six shotgun pellets were in his neck. The spread of the blast was 14 inches in diameter. The coroners official cause of death was recorded as "Hemmorage,due to gunshot wounds of head and neck, inflicted by a shotgun in the hands of some person or persons at present unknown" 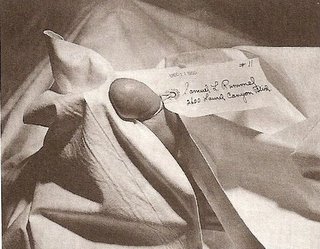 The weapon was found early the next morning across the street, lodged in the crook of a tree,apparently used by the assailant to steady his aim. As for the assailant, he was never found and the murder of Sammy Rummel remains unsolved.

Someone with alot to lose had silenced "The great mouthpiece" 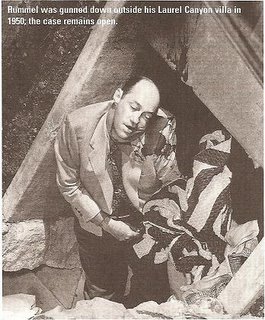 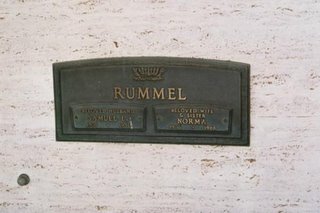